The start is at Idroscalo in Milan. Built by Mussolini for Flying boats to land, now just a recreational artificial lake. Ron and I rode there, from Vittorio's, with Mike Webster and Howard Chambers, and met the rest of the team there. 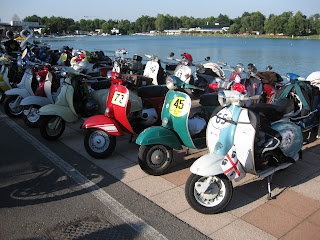 Everything appeared to be very disorganised. The officials seem to expect you to know everything by osmosis, and that is a problem. It's not disorganisation... it's lack of communication. You are very reliant on people who have done this event before, but even they don't seem to know exactly what is going on. E.g., we arrived, we go to scrutineering. Can't get that done because we had no pass, which you get from Registration. We can't ride the sccots to registration, so we park them up along the water front and walk to registration pay the €1090 we owed, which is all inclusive... which it isn't, because we then have to pay another €10 to join the club to cover us on insurance.

Then we can get scrutineered... Do you have a headlight, rear light and a horn? Yes? OK!

Next drop off the bags. Ron and I both have two, as we are both in couples. We can't have two because we are only allowed one as we only have our ID badge. We had been told that the team had the packages for Akiko and Suzanne, to then find out that they didn't, someone else did. So, we got the ID badges, and were then told that it was competitors only that got bags moved for free, so we then had to pay another €25 to have the bags transported. It may seem like a whinge, but the litany goes on. 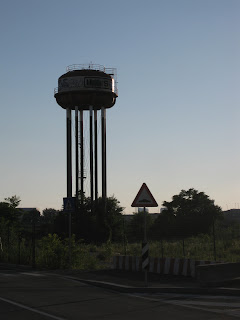 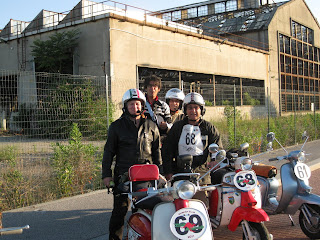 We went to the Innocenti factory. Not much left now. I couldn't get a pic in front of the main gates, as it was inhabited by Gypsies. We rode around the entire site. The area where Lambrettas were made is now a housing complex. We rode around to the back, and went past the famous water tower and pulled up behind one of the main factory building shells. Only one still has a roof on it. We took some photos, and as we were about to leave Dinato broke down. Meanwhile, a security guard shows up in a car and just watches us continually trying to get the scooter going... which finally turned out to be a plastic bag he had under the seat being sucked in the the intake manifold. 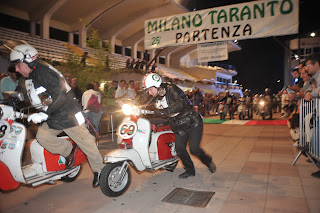 The start was amazing. The build up, not much, but then people started to go. Whilst I'm waiting I discover that the traditional method is bump start... which I practice. This is in the last 15 minutes. People start going. Eventually we are next in line. Howard Chambers and Mike Webster are announced as being Australian and get a huge cheer. Then it's Ron and I, and the announcer corrects what he said before, but the cheer is not as big... but we run, we bump, we start... we go around the corner......... and stop to meet the rest of the Lambretta team. You see.... it's night time. It's best if we all travel together, which we mostly do. One of the amazing things is that locals are out a 3am or 4am, on the side of the road, cheering us on.
We are on our way to Zola Predosa, 347km the way a very drunk crow flys.

Eventually, after the first stop, at Crema, we start to split into smaller groups. There's Howard and Mike on their D's. There is the "fast boys" who run very fast, but have to fill up every 70km, and there's the plodders, such as myself and Ron, who keep going at 70kph, but only fill up every 160km, or so. As it turned out, plodding seems to be quicker than being fast.

There were some amazing sights over the trip. Towns which I wish I had seen in the daylight which had obviously changed little in centuries. However, my favourite was crossing a bridge as daylight was just showing on the horizon, with it reflecting on the water and being behind an ancient arched bridge, which was also reflected. Unfortunately, the light was too poor to take a photo, but it is instilled in my memory. Also driving doing a fantastic boulevard in Parma. Just incredible.

We had a number of stops during the night and morning. Fiorenzuola d'Arda serving Champagne... Ah, Champagne at 3am whilst in a race! Exactly what you need.

It was hard going though. Not because of distance, but because we travel a bit, and then stop and wait for a while before we can go again. This adds so many hours to the trip... it is really that that exhausts you.

Finally, the last section starting at Spilamberto was a twisty bit in the mountains. Pure bliss as it loosened you up after riding in a straight line for so long. So much fun! The scenary was amazing, with fantastic sights, and amazing roads. glad to say that I overtook quite a few motorcycles... who really didn't want to be overtaken by a scooter.

Finally, into our host town for tonight, Zola Predosa, which is just outside Bologna. I was so happy to see the chequered flag. We stopped, we talked, we ate, we drank. Then we got back to the hotel, and THEN I felt tired. I hit the bed about 1pm, after being awake for about 30 hrs, and I crashed. I didn't wake up again until just before 6pm. We then had to get ready for dinner. We got collected by bus and taken to the other hotel, where Dinner was held in a large tent. There maybe 280 competitors, but including organisers, support vans, ambulance, etc, there are about 500 people to cater for. 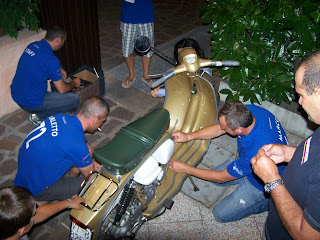 Dinner finished at about 11pm, and back to the hotel. It may be bed time for me, but I returned to find the fast boys in the middle of rebuilding a very nice Golden Special with a Mugello, variatronic and Ancilotti. Not because there was anything wrong with it, just the owner wanted to go faster. We had to be up again at 6am, for breakfast, 8:24am start and then 322km of twisties! These guys finished, apparently, at 1:30am.
Posted by Siobhán Ellis at 11:41 PM