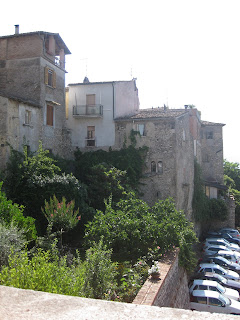 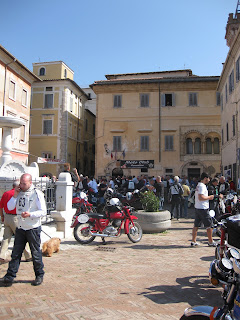 "Easy day" today. Only 187km. Ferentino to Caserta. Started with the 20km back to the finish the day before, so it's really 207km. A climb to 570m, down to 200m, and backup to 450m and down to Casino. First, the Ferentino Moto Club saw us off again. We were all packed in this little square back up in the mountain village. The sun was already blazing, so everyone was trying to stand in the shade. 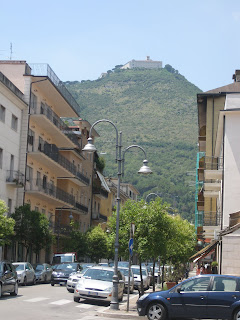 A fantastic view up at Monte Casino, and I was the first family member to be there since my Uncle in WWII. The driving got noticeably worse. There was just no concept of lane control, and this now seems to be the general theme, as well as ignoring he concept of priority from the left on roundabouts. It certainly gets the adrenalin going, as it feels like everyone is out to kill you with their car.

Just outside Casino I broke down. No spark. I changed the plug and still no spark. Our breakdown van arrived and he cleaned the old plug, changed the gap and the machine started again! My replacement plug was useless! I then stepped on it, and tried to make up the lost time, but stuck behind some Germans who took up the whole road and wouldn't get out of the way. T make it worse, they even stopped for a photo, as they entered the control. Consequently, I was 1 minute late leaving the checkpoint. The first penalty point I've gained (It's bad to gain points). 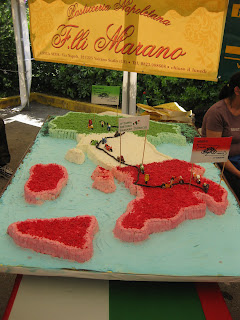 Still, it was the last stop for the day, so as soon as I crossed the line, I turned around and went back for a drink and food. I got a laugh, though. There was an enormous Italy shaped cake, with a line across it, roughly equivalent to the Monte Casino line in WWII and it said "No Germans beyond this point".

Had some great food, and then back on the scoot to Caserta and the hotel.
The Local driving just got worse and worse, as did the roads. Damn glad to get to the hotel. Dinner was in our hotel tonight, and I got us a prime seat right in front of the projector, showing pics from the event.