As today was the last day, I decided to wear my Innocenti overalls, as they used to do. It was also a lot cooler than wearing the leathers. However, I must admit I felt very vulnerable. It was a short day and started at 11am, but we had to ride to the start again, so we left the hotel at 10am. Today, just a short ride from Bari to Taranto. 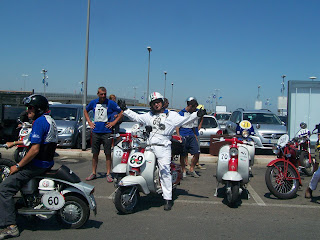 As I came up to the start line, I felt the same sense of buzz as I did when we started back in Milan. Even though I didn't do 200km, I had a grin from ear to ear. I was going to complete the Milan to Taranto on my scoot. I felt sorry for Howard as he wasn't able to complete the ride, but he was looking better than yesterday. 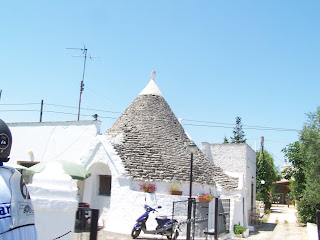 We started, and were on our way. Each section was very short. We kept riding past these circular stone houses called Trullo, collective known of Trulli. Apparently very sought after as they are cool in the summer, and warm in the winter. 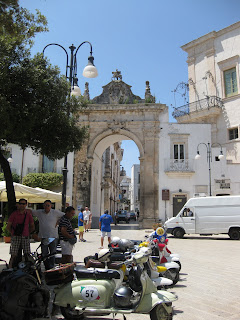 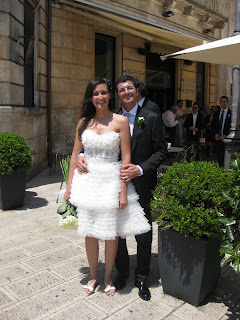 One town we pulled into, we rode through a Roman arch into the town square, which was paved with extremely slippering limestone pavers. There was a wedding on, and the bride, in a vintage style dress, was getting her photo taken with all the bikes and scoots. She seemed to be lappin it up. 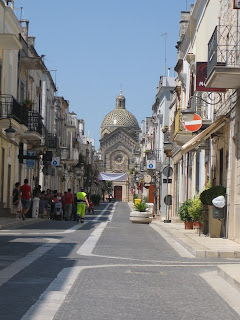 The last stop of the day, we rode down a street and the whole town was out in the heat welcoming us in. When I got to the end, I looked back, and it was a fantastic sight, with an amazing church at the end. 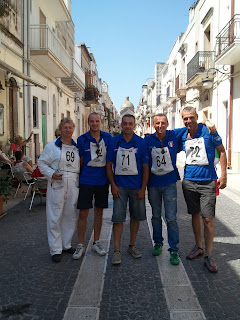 They took our cards for the day, and we had to wait for everyone to come in before we could eat. This is because everyone left together to ride the last 20km's to Taranto. So, a few of us took the opportunity to go for a beer (Had I mentioned how cheap Beer and Wine is in Southern Italy? Beer is the price of Coke, about €2, and wine is about €5 for a reasonable bottle).
Finally, nearly everyone was there and we were allowed to eat. Then suddenly, with no announcement, it was everyone on their bikes, and we were off for the last 20km. There they stopped us. We were to cross the finish line in number order. However, my scoot had decided to throw one more wobbly.... literally.... at me. During the event, I had noticed the handling was not that good, and now it was diabolical when I went around a corner. I looked at the front wheel and it was leaning over. It was just about rideable, and I was determined I was going to finish. I also took this break to introduce Donato to a great British food tradition, the icecream soda!

I had one more, good surprise, for me. The last 500m was a straight line sprint to the finish. Ron and I were on the line, and the flag went and we belted down the sea front in Taranto, going through the chequered flag. Then time to pose for some pictures, and be interviewed by the event for video. Then off to the final night... fortunately in our hotel. 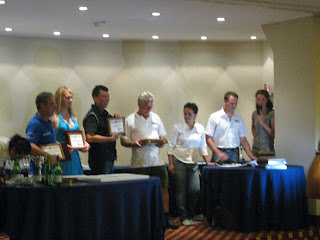 Unfortunately Ron and I didn't place, but we got trophies for competing,as well as distance travelled with Hide-san, from Japan, and the Kiwi, who actually got furthest travelled.
Posted by Siobhán Ellis at 9:04 PM