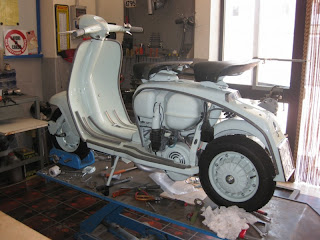 We started the day at the Lambretta Store in Puglia, where Ron did some maintenance on his scoot, which consisted of adjusting his front brake, checking the oil, and replacing a screw that had come loose. We had a good look around Enzo's store, and particularly at his restorations, for which he is getting a good reputation as the quality is excellent, but he can only manage to do 4 a year. 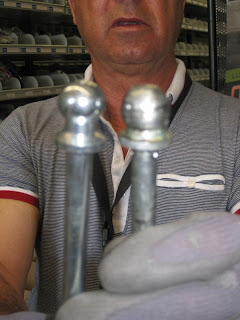 I got to discover the monetary damage from the repairs, which was very reasonable as I had a huge favour done for me, and also what the problem was:

Basically, the rods were not correct. They have a ball on the end, and the ball was too big, thus they did not sit in the cup on the links properly, and the springs were too weak. To add to that, one of the rods was bent! Oh, and the bolts in the fork buffers were cross threaded. To say I was a tad unhappy would be an understatement. 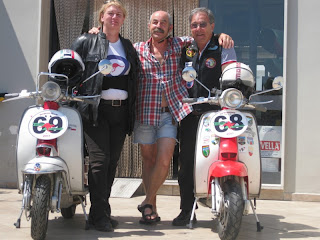 Ron was finished with his servicing, and Enzo wanted some pics with us. So, once more we posed. Obviously we were more than happy to do so, as Enzo had been such a gracious host. 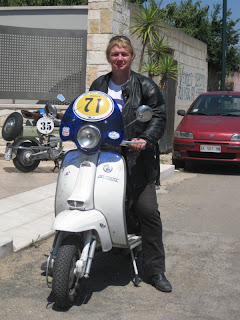 I had one more treat in store for me though... I got to ride Tino Sacchi's Targa Twin that had been in the Milan-Taranto. Enzo took us down the road towards the beach, and I opened the throttle and, very quickly, everyone else became a dot in the background... and I wasn't even full throttle. I had it up to 140kph, and it was still accelerating! And smooth? I was on a rock hard ancilotti seat, and could hardly feel any vibration. What a beautiful machine. 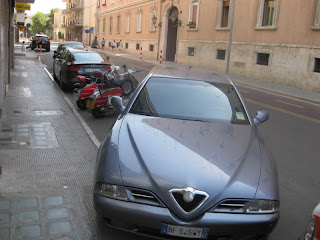 Finally, we were off once more, on our way to Foggia (Fodge-ee-ah). nOt much to say about the ride, except it was about 300km of motorway riding and so we mainly saw barriers, with an occassional stunning view. We were supposed to stop in Molfetta, but due to me not understanding how to program my GPS correctly, we rode straight past it. We then carried on to Barletta where we stopped for lunch, parking neatly beside the road. Which was pointless, as the Southern Italians don't believe in doing the same. 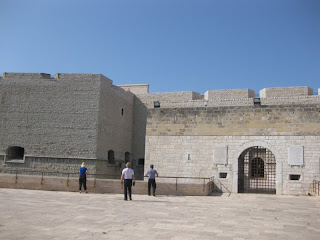 Part of the reason for stopping at Barletta was to see the magnificent castle, which was initially built by the Normans in the 2nd half of the 12th Century and restored in 1996. When we went to see the Castle, it is open 6 days a week... unfortunately, it was the day it was closed. Barletta is famous also for the Colossus of Barletta, which we missed, and also because it was the first place of Italian resistance to the Germans in 1944.
When we arrived in Foggia, Ron asked someone about a hotel, and we were directed to the Mercure, Hotel Cicolella, which was an amazing art deco hotel. Very nice. The room even had its own sitting room, and a bath! Ah, the glories of a bath when you've had a hard ride. The only downside of the place was that the carpark was extra and a whole block away... which was enough distance for Ron to get lost.

We met Ron and Suzanne for dinner around 8:30pm, and were about to go out when we discussed the option of the set menu in the hotel restaurant for E35 a person, including wine and water. We decided to go for it. It was superb and, once again, it was huge.
Posted by Siobhán Ellis at 6:53 PM