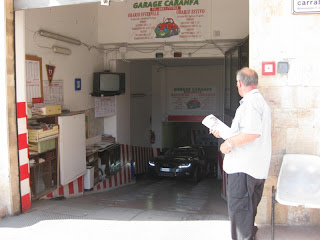 To leave Foggia, we first had to get the car out of the underground carpark with the very steep entrance. Just turning it around down there was an art in itself, but then getting it up the ramp was problematical as the car only just fit. I had scenes of the Top Gear episode where they stop traffic in Paris trying to get 3 super cars out of a similar car park.
Ron had suffered a bit on the ride the previous day, so we decided to pick a near location, which was Porto D'Ascoli, and a stretch goal of Ancona, which was founded by the greeks in 327BC. Porto D'Ascoli, was a modern city founded in the 13th century, so nowhere near as interesting. 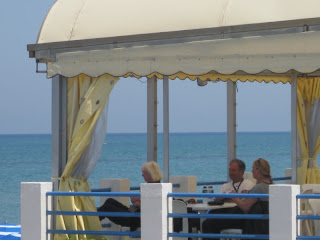 The drive along the coast was quite breathtaking, and the tunnels a welcome break from the beating sun. We stopped near San Vito Chietino for Lunch, at a beautiful beach side area. You could see lots of Africans walking the beach with these huge bags containing all kinds of things, such as swim suits, t-shirts, sun tan lotion, etc... trying to sell their wares. I also noticed the support van for the Swiss Laverda Club, who had been at the MiTa, were there and that they had been to Cornwall (Kernow sticker on the back door)
We soon got to Porto D'Ascoli, and decided to push on to Ancona, and so we reserved a hotel there. We then entered a 75km traffic jam! Eventually, after 3 hrs, we gave up as we just could not face the last 25km, and pulled into a roadside hotel that used to be, but was still advertising as, 3 stars.

The hotel, you could see, had had quite a bit of money spent on it in the past, but it was now past its prime. Still, beggars can't be choosers and we settled in. I will say, though, that the food from the "restaurant" was again, extremely good. Can't fault it at all.

The bed's were interesting, in that Akiko and I sank into our beds, whereas Ron and Suzanne's were, apparently like rock. I didn't sleep too much, as it was so uncomfortable.
Posted by Siobhán Ellis at 7:09 PM