Day 7 - Getting the forks fixed

We rode to Torchiarolo in Puglia (Pooh-lia), where the previous night the owner of the Casa Lambretta Consesionaire had offered to help with the forks. It was about 90km of very scarey riding. It was OK when going fast, as the gyroscopic effect of the wheel made it go upright, but as soon as I hit a bump, or had to slow for a corner, it got quite hairy.

Still, we made it into town. It looked like a place out of a spaghetti western. All the shutters were closed. I half expected to see a kid run across the street, or hear a dog barking, and then have Clint Eastwood appear, but instead right outside a bar was an LI series 2, so we pulled up... the owner was a member of the local Lambretta club, and offered to call Enzo for us... who was uncontactable as he was too busy having fun on the twin. Meanwhile, we needed somewhere to stay, so this woman, Amelia, turns up racing through town in her Fiat Panda, to make sure we stay with her, and that we are OK. So helpful, it almost hurts. 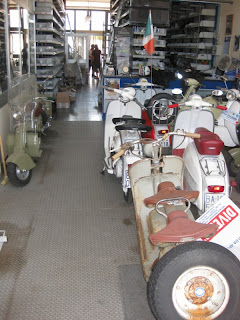 Enzo showed up, we had some beers and then he took us to his workshop. Which is extremely well stocked and has some beautiful machines that belong to him. Once more, it was "go away and leave it with me, I'll fix it". So we went off to the B&B, which was also recommended by Enzo, and was walking distance away. 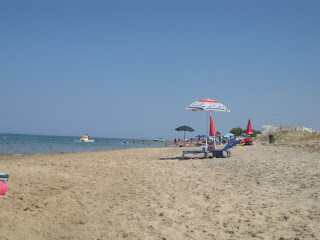 Akiko and I wanted to go to the beach, and Amelia gave us directions with her broken English and a map. She kept asking if we wanted her to accompany us to make sure we were on the correct road (Torchiarolo is a maze), but we said no. We were working our way through town, and she suddenly appeared. She had decided to look for us and do it anyway!

The beach was fantastic. Water was beautiful and warm, and the section we were on was not crowded at all. I christened my first ever Bikini, and we sunbathed for a while (How nice to not have a sun that cooks you in 30 mins flat), and just enjoyed the ability to relax. 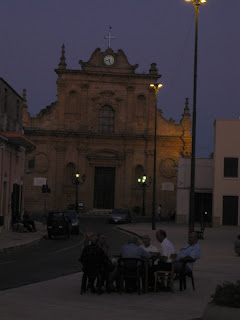 Then it was back to the B&B and time to get ready for dinner. Enzo had called, he had finished the scoot and was going to show up with it later. He then going escorted us to a bar, then he went home to get changed. We sat there at the bar, and watched as the locals started to come out of their homes, and as the town started to come alive. 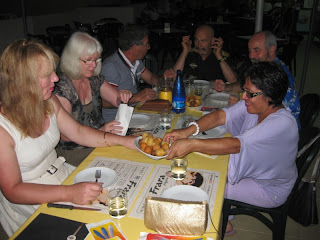 After about 45 minutes, Enzo showed up again with a friend and then took us back to the beach for a fantastic meal and to meet his wife. It's amazing, but the town had not only come alive, it was packed! It really is a nocturnal existence in this place. Again, the company was fantastic, as was the food. Enzo's wife was an absolute delight.

We had tjis very strange table mat which was an advert. It showed a woman cupping her breasts and looking very happy. She had rings on her fingers. I was trying to work out what it was selling. In the end, I asked..... jewellery.
Finally, to bed, and then up again the next day to collect my scoot. Find out what the problem was, and for Ron to give his scoot a service.
Posted by Siobhán Ellis at 7:31 PM