I'd heard Lake Como was a beautiful spot, and I really needed to see that. The people around where we are staying are lovely people, very helpful. However, the area is very industrialised, and the traffic is quite heavy. So, what a great place for a shakedown trip. It's only 70km away, so Suzanne and Akiko could come, but far enough that any bugs in the machine should be found. 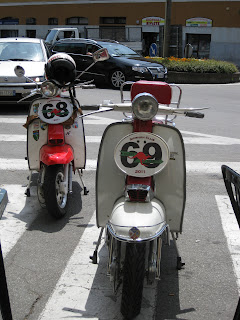 We got about 10Km, and my engine started racing rather badly, so we pulled over and checked the carb. There was a lot of very fine red powder in the carb, so we thought maybe fuel starvation. I cleaned the carb and it seemed OK, so off we went again. Unfortunately, I'm used to bolts that actually have some strength and in tightening up the clamp, the bolt snapped. Score 1 for superb Indian Engineering on the Jetex Carb (For the uninitiated, original Italian 22mm carbs are very hard to find, so we tend to use Indian copies). It was now 12:30, which meant that all the stores were closed for Siesta, and so we stopped in Melzo to have some water and a Pannini, and wait for 2:30pm, when the local scooter store would open again.

We caused quite a stir pulling up outside the cafe. People were genuinely delighted to see a pair of Lambrettas and when they found out we were from Australia, they nearly fell over themseves. This is fairly common. People talk to us at traffic lights, or even just shout out as they pass us in the car, or honk their horns and show a thumbs up.

I took the opportunity to have a look at the carb again, because it was still sticking, and found that the problem was the pivot point for the lever on top of the carb. Basically, if the nut and bolt were done up, the lever couldn't pivot properly, and so the carb stuck open, and so would race. Score 2 for Indian Carb quality! I loosened the nut and bolt, and it fixed the problem. However, this meant we now needed a small 7mm nut as well, or we'd loose the nut from vibration. 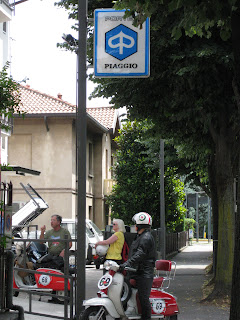 We arrived at the Scooter shop to find it was a Vespa dealer. I swallowed my pride, as Vespa nuts and bolts are better than what I had experienced so far. Initially the owner was not so keen to help us, thinking we needed his workshop to repair the scooter, and he pointed us to Vittorio. However, when he found out we just needed a bolt and a nut, he was more than delighted to help. He had been a Vespa dealer since the 50's, and had a very nice SS90 displayed inside his shop. 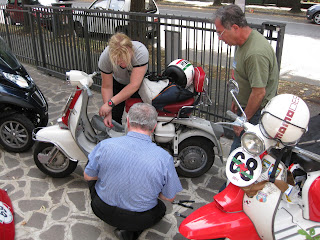 Even insisting on doing up the bolts himself, as he was concerned that I'd scratch my nail polish. Ron was kind enough to tell him it was ok, and not to worry. Such a knight in shinning armour! 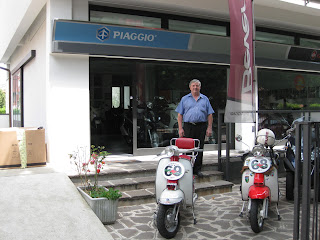 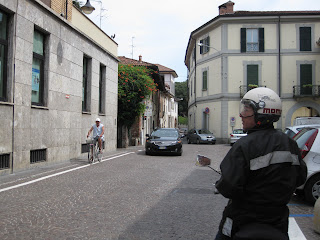 We arrived In Gorgonzola with no further mishaps. We stopped for Ron to check out his GPS to the next town, and again someone stopped to talk to use because of the Lambrettas. When Ron told them where we were going, he told us he knew a fantastic way to get there and insisted we follow him. Apparently it was exactly the same way the GPS was going to take us and I still don't know what was so fantastic about it. 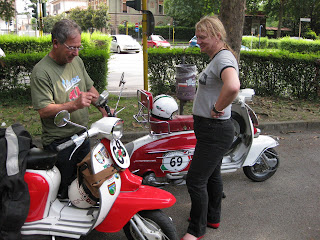 We got to Monza and Suzanne was feeling a bit exhausted from the heat, so we pulled up on the pavement on a boulevard which had some stunning buildings, and had some water. We were now 23km from the start, and it was 4 hrs later. Akiko had had enough too. So the answer was Bust! We never made it to Lake Como.

On my return, I called in to Vittorio's to get some more parts, and when I went to kick start the scoot, I found that the kickstart shaft had broken. As I type this, It's Saturday morning, the race starts tomorrow at midnight, and I'm just off to Vittorio's to put in a new kick start shaft.

As a trip to Lake Como.... a complete disaster. As a shakedown trip.... success! The glass is half full!
Posted by Siobhán Ellis at 7:52 AM