Over the last few days I had realised that the front brake was about as useful as the rudder was on the Titanic when it was trying to avoid the iceberg! So, it was back to Vittorio's to use his workshop to find out what was wrong. Fortunately, it was just high spots on the shoes, and a bit of rubbing with glass paper got that sorted. Front brake works now, but needs some use to get it to work properly. 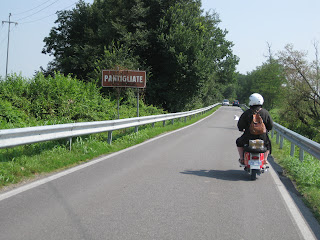 Tino Sacchi returned from EuroLambretta that morning, so we went over to meet him and his wife, Nadia, in the late afternoon. This meant riding through narrow windey lanes with crazy Italian drivers coming in the opposite direction. 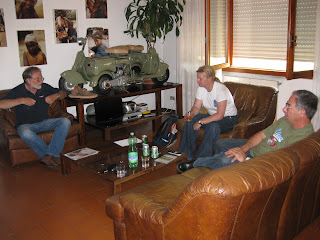 Still, we made it to Tino's, and we were all warmly welcomed. You walk in, and the place is wall to wall Model A's. The two behind the television are because Tino wanted to see both sides at the same time, apparently.

Tino and I discussed the Lammie Drive North to South in 2013, particularly around dates, and what the Italians will be expecting. He liked that some nights were under canvas. He had some recommendations for me, based on his experiences of organising such events in the past. Then Tino decided he was hungry, but first of all he had to show me his bunker. 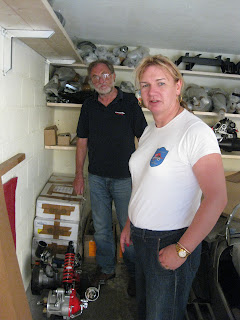 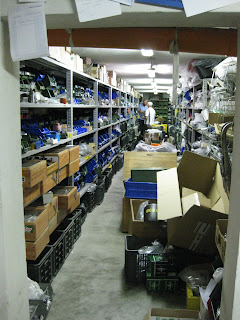 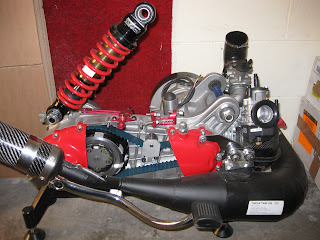 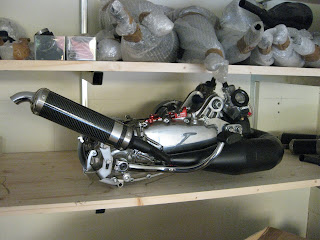 I got to see the famous Targa Twin, and Tino suggested to me that Akiko might leave one under the tree at Christmas time.

I also saw his Lotus 7, his wwII German military Zundapp with sidecar, and Super Monza, etc, etc, etc. He kept saying "Now we'll eat", and then find something else to show me.

Meanwhile, some more people from the Milano-Taranto team had showed up, and were building spares for the ride. Eventually, we all were reallly hungry and set off for dinner: 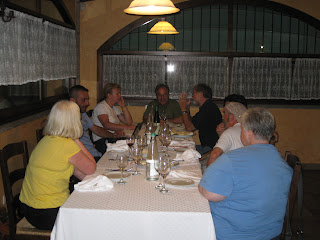 Finally the night was over, and Ron, Suzanne, Akiko and I rode back to the B&B and arrived at 1:30am. Next day... Lake Como! A Test ride.
Posted by Siobhán Ellis at 7:36 PM