Day 5 was Caserta to Bari. It started well. We actually started from right outside the hotel, and had more scarey riding throuh the traffic of Caserta, but once we got into the countryside, things started to calm down. I wasn't happy riding without a spare spark plug, but Adolfo in the support van couldn't find the new ones. 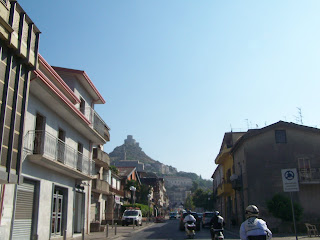 The next checkpoint was Montesarchio, another hill top town. This time one that surrounded what looked like a fantastically well preserved Normal Castle. I got a fairly good Spark Plug from Donato. This was a welcome stop, as it was damn hot again. Drank plenty of water, and stayed in the shade.
We left the check point. Everything was going well, but then the scooter cut out... right infront of a couple of guys standing by the road watching. I Changed the plug and whilst I did that, one of the guys produced 3 more plugs for me. She started up again, but within about 3 km, she stopped once more. I then put in one of the very clean used plugs provided to me by the spectator and that enabled me to get going again. I went long enough that I actually began to think I was going to make it, but fate had a different idea. 2 more plugs later and my scoot wasn't going anywhere. It was either the CDI or the pickup on the stator plate. I had about 60kms to go to the next checkpoint. 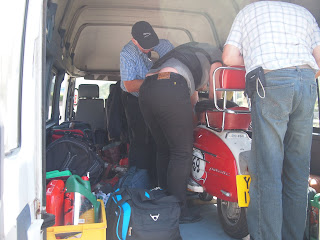 Malcolm and Colin, in the LDV picked me up. Just outside just outside Montemilleto we spotted a scooter shop with a whole bunch of, what I thought were Vespas outside, . As the CDI is actually a Vespa unit, we pulled in. They were about to shutdown for Siesta, but I persuaded them to stay open. We unloaded the scoot to try and get another CDI. As it turned out, they were LML's, not Vespas, but the unit is nearly the same. However, they only had some used ones, but no new ones. I decided to risk it. 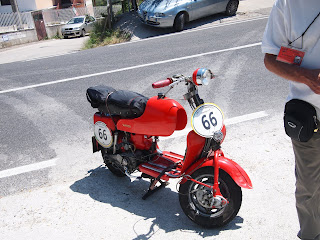 We actually got the scoot sparking again, and was just re-assembling it when the news came in the Howard Chambers had written off his machine and nearly himself, so they had to leave me....knowing that the main support van was behind us. Later, I had the news that Howard was OK, badly bruised, with a cut above his eye, but still mobile. Apparently a car pulled out in front of him and just crossed the road so he ended up hitting it. My woes, unfortunately were not over. I got the scoot up the road, but it cut out again. It was almost definitely the pickup. 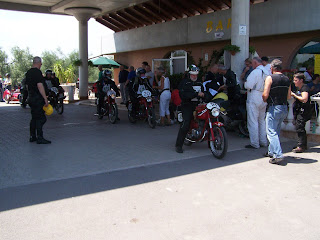 I was collected Adolfo in the team support van, which I found out later, took quite a few phone calls. We were now on the way to the last time point of the day, at Cerignola, via the Autostrada when it came in that Donato had also broken down. We collected him as well and then continued to Cerignola, where it was blisteringly hot and the only relief was the bar which had air conditioning on full blast. Not wanting to completely give up, when I spotted Howard, I checked to see if he was OK. He offered me his spare CDI and we checked to see if it worked. The answer, unfortunately, was no. So it was definitely the pickup.
We drove to the finish about 100km away. To be honest, it was so hot and the roads were awful, and lots of suburban driving through Bari and its outskirts... I'm almost glad I wasn't riding it.

When we got to the hotel, all I wanted to do was unload the scoot. Howard had a spare pickup, and there was a gas powered soldering iron available, but nothing in Italy is easy... especially in southern Italy. We were in a different hotel from the main one, and some people didnt want to go to the main event, Akiko was at the wrong hotel, and I wanted my scoot. Poor Donato was doing all the translating for about 4 simultaneous conversations. How he kept his sanity, I don't know. Eventually, I lost Donato and I asked where he was.... the van was being unloaded. I got my scoot. Took out the tools, lay on the ground and started to dismantle my machine when Donato walked up with Paulo and said "You want the variatronic?", I replied that I did. "OK, Paulo will do it for you". "OK, I'll just dismantle this". "No Paulo will do it for you. You get a shower". "Really?" "Yes, really. He's done 50. Go get a shower" 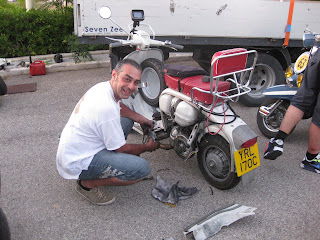 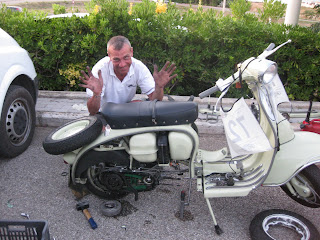 After the shower, about 8:15pm, I walked down to the carpark. There were 3 scoots being worked on. Donato's was having open heart surgery, and the crank, bearings, seals, barrel and piston were being replaced. Mine was in the process of being reassembled already. I was told to leave them alone and go to dinner. 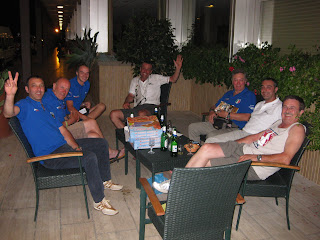 When I came back at about 11:30pm, the boys were sat outside the hotel with a pile of pizza boxes and beers. Everything was finished. My scooter started wonderfully, better than when it was good before. Donato's was done too, as well as the 3rd one.
Because I started that day, and because I handed in my time card at the end, all I lost was points. I am allowed to start again the next day and, assuming I finish, I will have completed the Milan to Taranto. Unfortunately, in my mind, there is still that missing 200km.
Posted by Siobhán Ellis at 7:55 AM