Today I had to change the kick start shaft. Thank god Casa Lambretta is down the road, and that Vittorio let me use the workshop on a day when he's usually closed. 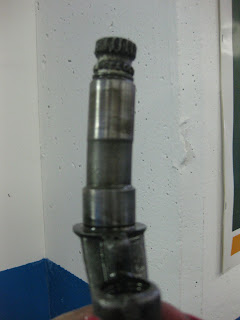 I started by 8:30am, and by 9:30am I had the engine disassembled. As you can see, the old kick start shaft was very bent. Vittorio then walked into the workshop with 3 shafts, of which he gave me an original Innocenti shaft. Around 10am, Vittorio went to get his son, I nearly had the engine re-assembled. I then broke an engine stud... and I had no-idea where the tools were. I had something else to do, so drilled the hole for the easy out, and then added a mount for my GPS. Vittorio returned to tell me that he had no easy out, and that one stud doesn't matter... well not that stud. By then it was 12:30, and Vittorio went off for lunch, and I continued ressembling the engine for the 2nd time... only to find that the kick start piston was catching the first gear, so I had to disassemble again, adjust the kick start ramp and re-assemble for the 3rd time! Perfect. No leaks. Working kick start! I finished about 3pm.

I returned to the B&B, and then went to fit the mirror.... to find the thread was too big for the hole. Ron phoned Donato, as I didn't want to bother Vittorio again, and Donato showed up at about 4:30pm with a drill and we solved that. Donato was about to leave, and then snapped a throttle cable. It took four of us to fix it. Donato to panic, his friend from Verona to supply tools, me to thread the cable and Ron to supply the cable. Almost sounds like a light bulb joke!

This evening we had the team dinner... which started at 9pm. I got to meet Howard Chambers and Mike Webster for the first time, along with their support crew of Malcolm and Colin, in possibly the only LDV in Italy!
Posted by Siobhán Ellis at 8:07 PM